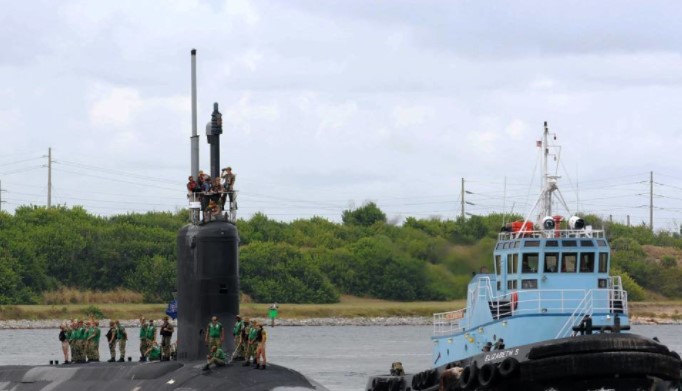 The network of coalitions being built by America in the Asia-Pacific region (APR) aimed at aggressive military containment of China has grown into another alliance. US President Joe Biden, together with British Prime Minister Boris Johnson and his Australian counterpart Scott Morrison, announced a new trilateral defense and security partnership. The main component of the named AUKUS (according to the first letters of the names of the participating countries) of the new Anglo-Saxon alliance will be the transfer of sensitive technologies for the construction of nuclear submarines to Australia, as well as the further integration of the military and intelligence potential of Washington, London and Canberra for a tough confrontation with Beijing.

“Today we are taking a new historic step to deepen and formalize cooperation between our three countries. We all understand that it is necessary to guarantee peace and stability in the Indo-Pacific region on a long-term basis,” Biden floridly explained the geopolitical underpinnings of the initiative. the strategic situation and how it can change. ” Who exactly, according to Biden, threatens to change the strategic alignments in the APR to the detriment of American-British-Australian interests, remained outside the brackets of his speech. They never mentioned China and Johnson and Morrison, and an unnamed high-ranking White House official during a telephone briefing specially “chewed” for journalists: “the new alliance is not directed against third countries.”

The ridiculousness of such statements, taking into account the essence of the new alliance – a sharp increase in the combat capabilities of the Australian Navy in the coming years and their actual unification with the US-British submarine carriers of offensive weapons – is beyond doubt. It is no secret that at all levels of government, the United States has long and bluntly called the PRC the main strategic threat. Ever since the time of the Barack Obama administration, the concept of “the US pivot to Asia” has been implemented, which ex-President Donald Trump put on a tough anti-Chinese track by entering into a direct political, economic and informational confrontation with Beijing.

The current owner of the White House also demonstrates continuity on this issue, consistently raises the stakes in the escalation of relations with the PRC and “levies” the Celestial Empire both from the west and from the east. In particular, Biden openly pushed through a communique that was extremely critical of China during the June meeting of the G7 leaders, and then successfully “fastened” NATO allies to the anti-Chinese coalition being formed by including the relevant theses in the final document of the North Atlantic Alliance summit. At the same time, Washington is actively promoting various regional associations to contain the PRC. For example, the “Quartet of Democracies” QUAD (USA, Australia, India and Japan), with whose leaders the American leader intends to hold a summit as early as next week.

Backstab to partner
However, if you look closely, there is actually nothing particularly surprising in the loudly presented “new” defense alliance of the United States, Britain and Australia. These old English-speaking allies (along with Canada and New Zealand) have been closely linked since the 1960s by the secret Five Eyes Agreement, the main task of which is to collect and exchange intelligence information about potential adversaries. And Biden’s declared deepening of the interaction of the Washington-London-Canberra axis along the line of “intelligence, cyber capabilities, artificial intelligence and some underwater capabilities” looks like a purely technical moment. In addition, Australia has traditionally been a buyer of various American-made military equipment. The upcoming construction of submarines on the Australian shipyard based on Adelaide based on American-British technologies and projects (within 18 months the issue of starting the production of submarines with nuclear reactors will be studied, and then up to 8 submarines with conventional, non-nuclear weapons will be produced) and in this regard it looks logical. In addition, it “for generations ties” Canberra in terms of military-technical cooperation to Washington and London, writes defensenews.com.

Another thing is surprising – how indelicate the Anglo-Saxons treated their close NATO partner, roughly “wiping” France from their military-industrial trough. After all, the contract signed by Australia in 2016 with the French military company Naval Group, which provided for the purchase of 12 Barracuda class submarines worth $ 66 billion, has now been broken. Paris has already called this decision “a stab in the back.” According to French Foreign Minister Jean-Yves Le Drian, “the allies do not behave like that,” and “one-sided, brutal and unpredictable” behavior “resembles the Trump times.”

Another thing is surprising – how indelicately the Anglo-Saxons treated their close NATO partner, roughly “wiping” France from their military-industrial trough
The press service of the European Union also said that the bloc “was not informed about this initiative”, so the member states have to “assess the consequences.”

But they are already rubbing their hands with might and main in London. Boris Johnson, who sank heavily in the ratings after the chaotic Brexit and shaken up his own government the other day, AUKUS will “strengthen Britain’s position at the forefront of science and technology” and “create hundreds of high-end jobs across the United Kingdom” – a clear allusion to the big jackpot , thwarted by the British military-industrial complex represented by Rolls Royce and BAE Systems at the expense of the “thrown” French. In addition to economic bonuses at 10 Downing Street, they also “cut down” political points, clearly demonstrating to the electorate the successful promotion of Johnson’s concept of “Global Britain”.

“Narrow-minded geopolitical concepts”
Official Beijing reacted with expected but cold blood to the announcement of the creation of AUKUS, saying that it “grossly harms peace and stability in the region, aggravates the arms race, harms efforts under the international nuclear nonproliferation regime. Chinese Foreign Ministry spokesman Zhao Lijian called this a confirmation of this. that the AUKUS members “use the export of nuclear technologies as a tool for geopolitical games and apply double standards, which is extremely irresponsible” concepts “.

Much less restrained, indicating the risks of proliferation and hinting at possible retaliatory actions by Beijing, was the reaction of the Chinese media. Thus, in the editorial column of the Global Times (structurally included in the official newspaper of the Communist Party of the People’s Republic of China “People’s Daily”) notes that “the United States is hysterically polarizing its system of alliances.” “Using external pressure to push middle countries like Australia toward the defense level of nuclear submarine ownership is a strong signal for middle countries around the world,” the newspaper writes. “If the US and Britain help Australia acquire nuclear submarine capabilities, this will mean the actual legalization of the acquisition of nuclear submarines by all countries. It also means the legalization of the international export of this technology. “