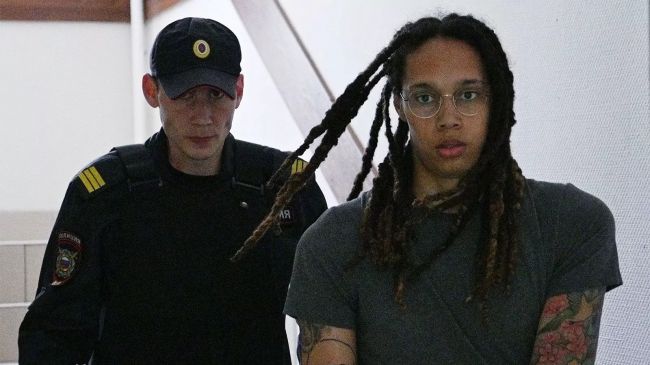 The Moscow Region court in Khimki has sentenced Brittney Griner to nine years in a maximum security penal colony and a RUB 1m fine. The American basketball player was found guilty of drug smuggling.

In February, the two-time Olympic champion was detained at Sheremetyevo airport. During an inspection of her hand luggage, the American was found to be carrying a vape with a peculiar odour and the tests proved that it was hash oil.

The basketball player insisted that her doctor had prescribed her marijuana instead of painkillers because of the side effects of drugs.

According to Match TV, the American made the statement after the court hearing:

“My parents have taught me two very important lessons: always acknowledge your responsibility and always work hard. That’s why I pleaded guilty to the charges against me. I understand them, but I never had any intention of violating Russian law.

I would like to apologise to my fans for the mistake I made. I would also like to apologize to my parents and sisters and my spouse. I didn’t mean to hurt anyone or break RF laws for a second. I know everyone keeps talking about me being a political pawn. But I just want to leave the politics out of it.”

Popular UFC commentator Joe Rogan commented on Brittney’s arrest and condemned the hysteria in the US media over the perfectly legal actions of the Russian side:

“Greiner’s been there for months and people keep going crazy about it. They say, ‘Russia should let her go.’ We have people in America who get locked up for marijuana, and they are locked up for years. These are not isolated cases – there are thousands of them. So what’s the difference? They’re not as good at putting the ball in the basket? Is that what it’s all about? They’re not good at something we like to watch and that’s why they shouldn’t be released?

When we talk about Brittney Griner’s horrible imprisonment in Russia, we have to remember that there are tens of thousands of people in prison for cannabis in America.”

“Today, US citizen Brittney Griner was sentenced to prison, another reminder of what the whole world already knew: Russia is unjustly detaining Brittney.

This is unacceptable, and I call on Russia to release her immediately so she can be with her wife, loved ones, friends and teammates.

My administration will continue to work tirelessly and use every means possible to bring Brittney and Paul Whelan home safely as soon as possible.”

Meanwhile, back on July 29, Russian Foreign Minister Sergei Lavrov had a telephone conversation with US Secretary of State Anthony Blinken to discuss a proposal from the US side to exchange basketball player Brittney Griner and American convicted spy Paul Whelan for Russian Viktor Bout.

“Regarding a possible exchange of imprisoned Russian and US citizens, the Russian side was urged to return to the mode of professional, without speculative information throwaways, dialogue in ‘quiet diplomacy’ mode,” the official website of the Russian Foreign Ministry said in a statement.