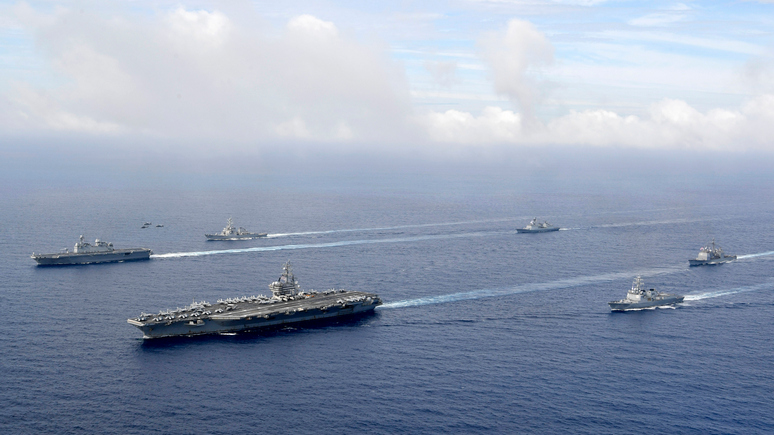 The US now needs to focus on the Chinese threat instead of acting on two fronts, says former US Navy Rear Admiral Charles Williams. In his article for The Hill, Williams writes that the U.S. Navy is now in poor readiness: it is inferior in numbers to the Chinese. In addition, U.S. naval bases are insufficiently prepared.

It is time for the United States to think about reorganizing its naval bases, writes retired U.S. Navy Rear Admiral Charles Williams in his article for The Hill. According to Williams, Washington no longer has enough money to maintain all of its bases.

In addition, the United States can no longer operate on two fronts, says Williams: therefore, it is necessary to focus on China. He points out that at the moment the US navy has 296 ships and 39 of them need to be decommissioned. Meanwhile China`s Navy has 355 ships and it plans to increase this number to 420 in the future. Williams also writes that the U.S. Air Force is at 67 percent readiness and the infrastructure is only 50-70 percent maintained.

The United States needs a fleet capable of defending the country’s interests, Williams writes. In his opinion, the main factor here is the naval infrastructure: according to calculations, approximately $16.5 million must be allocated for its maintenance annually, but at the moment only $5 million is allocated for it. As a result, many infrastructure facilities of American naval bases are already in disrepair.

As a solution to this problem Williams proposes to close unnecessary infrastructure facilities and give priority to the total number of ships and readiness of existing bases. However, Williams pointed out that the problems he described are typical not only for the US Navy, but for the American military as a whole.

In summary, Williams writes that the threat of conflict in the Indo-Pacific region is growing. As a consequence, the U.S. needs to act quickly and implement appropriate reforms.