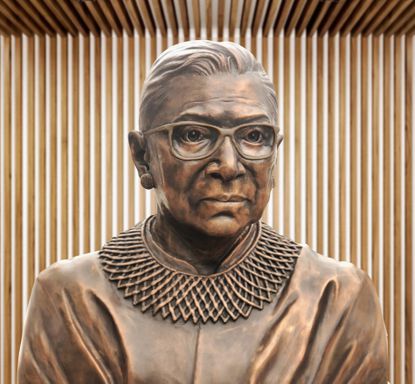 The statue is slated to appear on Ruth Ginsburg’s birthday next year, March 15, 2021. The statue will appear at the City Point multifunctional complex at 445 Albee Square. Brooklyn is the birthplace of Ruth Ginsburg. She will appear before the Americans with her arms crossed in front. The legendary US Supreme Court Justice will be wearing the famous crochet chain collar, which she wore whenever she shared the opinion of the majority.

According to the creators of the monument, artists Gilly and Mark, their work is designed so that everyone can stand side by side and be inspired by the life of the great Ruth Ginsburg, the main part of which was devoted to the struggle for equal rights.

As a reminder, Ruth Ginsburg was born in Gravesend and attended James Madison High School. She died on September 18 at the age of 87 from complications from cancer.
County President Eric Adams plans to mark March 15 as Judge Ginsburg Day in Brooklyn, cementing her legacy in her home are