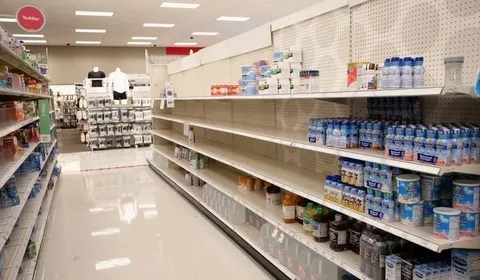 The energy crisis has led to record inflation and price increases on absolutely everything, including baby food, which is almost impossible to find in the United States.

The entire interaction was captured on video and later posted to TikTok as one  woman attempted to hold the other to account.

“This is not a joke. These are real prices! More than $7 a gallon! We’re being screwed over with this dirty Biden gasoline! Inflation because of Biden. Where is our money? In Ukraine! We’re also paying to keep quiet about Hunter Biden! $7 a gallon! I can’t afford it anymore!” complained one of the buyers.

The situation is similar in Australia. The price of utilities is going through the roof. In the northeastern United States, the cost of electricity skyrocketed by almost 300%. Food prices also perplex citizens.

Large supermarkets are forced to raise prices by a factor of two or three. Inflation is forcing Europeans to save by any means. For example, people in Great Britain save on fuel and food. Elderly people have a particularly difficult time at this time, they have to cut their expenses, and sometimes even cut off electricity and gas.

On May 4, the Federal Reserve (Fed) approved an interest rate hike of half a percent and allowed for an additional 50 basis points. According to Fed Chairman Jerome Powell, the main driver of inflation is supply problems, but the central bank’s tools are only aimed at demand. He added that the situation around Ukraine and quarantine at factories in China could exacerbate supply chain disruptions and the Fed can do nothing about it.