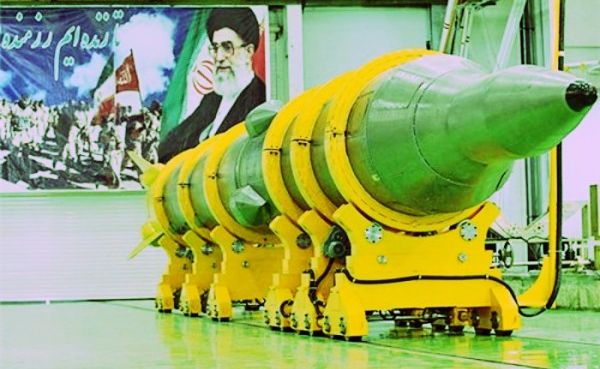 “Iran can immediately return to the Emad project and build a nuclear warhead if the Natanz facilities are attacked.”

The short video claims that the Iranians would develop nuclear weapons as soon as possible “if the US or the Zionist regime (Israel. – Ed.) make any stupid mistakes”.

According to Iran International, the video says Iranian ballistic missiles are capable to ” turn New York City into a hell of a ruin”.

“The nuclear installations at Fordow were built deep beneath the mountains of Iran and protected against anti-bunker bombs and even a nuclear blast. It has prepared all the infrastructure needed for a nuclear breakthrough,” the video says.

The IRGC oversees Tehran’s missile programme. In April 2019, while Donald Trump was still in the White House, the corps was added to the US list of “terrorist organisations”. Current President Joe Biden entered indirect talks with Iran in 2021 in Vienna to restore the 2015 Joint Comprehensive Plan of Action (JCPOA) on Iran’s nuclear programme, from which the US withdrew unilaterally in May 2018. One of the main obstacles to the resumption of the nuclear deal is the IRGC’s blacklisting in Washington.

On 11 April 2021, there was an explosion at the Natanz nuclear facility. Iran blamed Israel for its involvement in the incident and promised revenge on the “Zionist regime”. Official Tehran claimed that the centrifuge plant had been subjected to an act of “nuclear terrorism”.

Iran’s path to nuclear weapons has been shortened to weeks, the White House said in April this year, placing the blame on the previous Trump administration as talks between Tehran and world powers in the Austrian capital continue to stall.

Israeli Defence Forces (IDF) chief of general staff Lieutenant General Aviv Kohavi said in August 2021 that the Israeli command was accelerating plans for a possible strike against Iran to prevent it from obtaining nuclear weapons. “Progress in Iran’s nuclear programme prompted the IDF to speed up its operational plans, and the newly adopted defence budget is designed to solve this problem,” the Jewish military commander stressed at the time.

As a reminder, Iran’s supreme leader Ayatollah Seyyed Ali Khamenei issued a fatwa (a religious ruling based on the principles of Islam and Islamic jurisprudence) banning nuclear weapons back in 2013. Official Tehran said at the time that the IRI spiritual leader’s decision was intended to put an end, once and for all, to the debate on the country’s development of weapons of mass destruction. Iran is still a party to the 1968 Treaty on the Non-Proliferation of Nuclear Weapons.