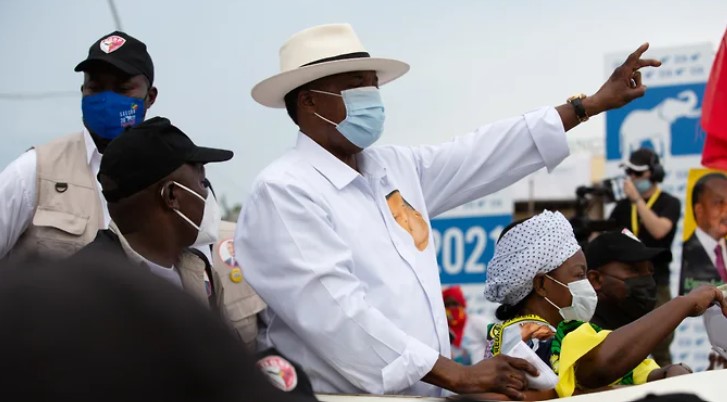 77-year-old head of the Republic of Congo, who ruled the country for 36 years, intends to become president again
Presidential elections are taking place in the Republic of the Congo today. Their main and only favorite is President Denis Sassou-Nguesso, who has ruled the country for a total of 36 years. To be elected for the third time, he was helped by the amendments to the constitution adopted in 2015, which “nullified”, in particular, his two previous presidential terms. Mr. Sassou-Nguesso is carefully clearing the political field, getting rid of dangerous competitors, so in the current elections he is again confronted by impassable candidates from the opposition, disunited and bloodied by repression. So, it seems that nothing can prevent Mr. Sassou-Nguesso, who received the nickname Emperor from the president of one of the neighboring countries, from the results of the current elections to take the presidency again with the tacit support of the international community – from Russia to the United States.

“In times of uncertainty, people need politicians with experience,” 77-year-old Denis Sassou-Nguesso said at the closing rally of his supporters in Brazzaville. Of the seven registered candidates, his main rivals are Mathias Dzon, who served as finance minister from 1997-2002, and Guy-Brice Parfait Colelas, head of the Congolese Movement for Integral Development (MCDDI), who finished second in 2016 for the presidency. … But they can hardly be considered real competitors to the incumbent president. Denis Sassou-Nguesso’s most serious opponents – Jean-Marie Michel Mococo and André Ocombi Salissa – are serving 20 years behind bars. The leader of the second largest party, the Pan African Union for Social Democracy (UPADS), Pascal Tsati-Mabiala, did not participate in the elections at all, apparently deciding that it would be wiser to simply “survive” Sassou Nguesso, waiting for the end of his new presidential term. in 2026. Against this background, there should be no surprises in the elections.

Not so long ago, Denis Sassou-Nguesso’s ally, the President of Guinea, Alpha Conde, gave him the meaningful nickname Emperor, although in his country he is better known as Ochuembe, which means “Wrestler” in the language of his native Mboshi tribe. And indeed, with his entire life, he proved that in the political struggle he has no equal.

In December 1969, Denis Sassou-Nguesso – at that time a progressive-minded paratrooper officer – became a co-founder of the Marxist-Leninist Congolese Party of Labor (CPT), and in 1979 he headed the party and the country for 12 years. The restoration of the multi-party system and the democratic reforms of 1990-1991 cost him the presidency – Sassou-Nguesso lost the elections to the head of UPADS, Pascal Lissoubet. But soon a power struggle broke out in the country between the government and the opposition, in which each side mobilized ethnic militias. Ex-President Sassou Nguesso was helped by Angola, and in October 1997 he, having seized the capital of the country Brazzaville, declared himself president. He retained this post after the elections, held in accordance with the constitution adopted in a referendum in 2002, and seven years later he was successfully re-elected. But two terms were not enough for him, so in the fall of 2015, at a new constitutional referendum, the age limit for presidential candidates was removed, the presidential terms were “zeroed”, and a year later Denis Sassou-Nguesso was re-elected to a new one, though not seven, but already five years.

“Let us forget that which divides us” – is sung in the national anthem adopted in 1959. However, in Congo-Brazzaville, whose borders were formed at the whim of the Berlin Conference of 1885, it was not possible to build a single political nation.
Of the 240 existing parties, most are based on clan, ethnic or regional blocs. So, the ruling CPT – on mboshi, MCDDI – on lari and bakongo, UPADS – on nibolek. This does not prevent them from cooperating, forming coalitions and blocs. Many Congolese believe that politics is irreconcilable feuds during the day and dinners together at night. Nevertheless, enmity is constantly smoldering in the country between the densely populated south, where the positions of the opposition periodically taking up arms are strong, and the north, from where the ruling military-political elite originate.

With the return to power of the “northerner” Denis Sassou-Nguesso in 1997, the southerners – vili, lari, nibolek – again lost their commanding heights in politics and economics. The incumbent’s hometown of Oyo, located in the Cuvette department, is growing at a faster pace, and even the villages in this area are receiving solar panels and refrigeration units unprecedented in most other regions, while interruptions in electricity and water supply are not uncommon even for the economic capital. Pointe Noire. But the real headache for the authorities is the region inhabited by the Lari people with the English name Poole, considered the granary of Brazzaville and the birthplace of anti-colonial and messianic movements. Its inhabitants rebelled twice – in 2002-2003 and in 2016-2017.

The situation stabilized only by August 2018, when the “ninja” (underground workers) operating in the region, led by the charismatic preacher Frederic Bitsamu, nicknamed Pastor Ntumi, laid down their arms.

The president’s clan has concentrated power over the oil and gas sector, transport and construction, the head of state also spares no expense to modernize the armed forces and police, and not least on the media.
In particular, he maintains strong ties with leading pan-African publications such as Jeune Afrique (the niece of the editor-in-chief of this media outlet Francois Sudan) and Africanews, whose branch, without the help of the head of state, is located in an ultra-modern high-rise building, from the Sassou Nguesso residence.

An active economic policy can include the fact that the state is trying not to interfere with informal small and medium-sized businesses to earn money. At the same time, Denis Sassou-Nguesso failed to diversify the economy, reduce dependence on oil exports, or resolve the issue of external debt and the problems associated with obtaining a new loan from the IMF. Now the consequences of quarantine restrictions are imposed on the consequences of a serious 8.6% recession and another shock on the energy market.

The last remaining trump card in the hands of the authorities is the “green economy”. The President will pledge to transform the planet’s second most important rainforest in the Congo Congress into a true Mecca of Green Congo ecotourism.

At the same time, despite claims about the origin of the president’s assets and France’s accusations of his son Denis-Christel in money laundering, Mr. Sassou-Nguesso himself never found himself in the center of major international scandals.
By the way, there are persistent rumors in the country that the president is preparing one of his children – and besides his son, he has two daughters Claudia and Stella – to be his successors. They are all MPs from the ruling party. Claudia is also her father’s communications advisor, and Stella is the mayor of Kintele, a suburb of Brazzaville.

In his region, the Congolese leader is considered the undisputed patriarch of local politics, with the respect of the leaders of Senegal, Togo, Guinea and Guinea-Bissau, he recently settled differences. Mr. Sassou-Nguesso’s assets include mediation initiatives in the settlement of various protracted conflicts on the African continent, including the CAR, DRC and Libya.